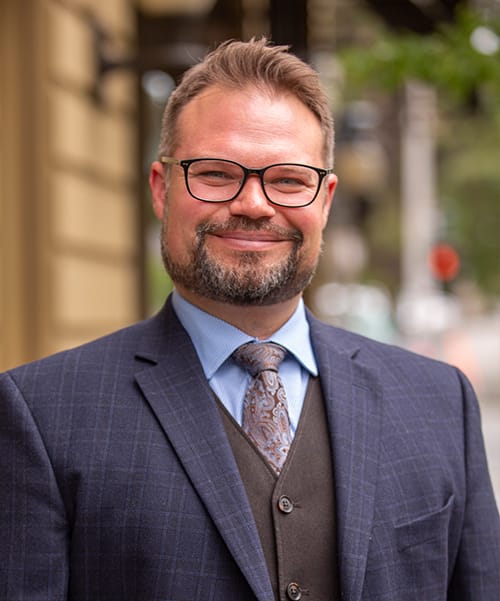 Empower clients in the court of law.  Tenacity. Passion. Care. In today’s changing social atmosphere, it is important to be flexible and open to new ideas in navigating the legal world.  Kent embraces new technology and forms of communication to best serve his clients in and out of the courthouse.

Kent graduated from Gonzaga School of Law with a J.D. and from Washington State University with a B.S. in Psychology. Both degrees were obtained with summa cum laude distinctions.  He is a member of the Washington State Bar and Idaho State Bar.  Kent has been practicing law since 2008, tried numerous cases, published articles on trial theory, and has been named top insurance attorney in Spokane, WA for the last 4 years by Spokane and CDA Living Magazine. Being licensed in both Washington and Idaho has many benefits when living near the border.  Kent represents clients in both states and travels extensively for site visits and legal representation.  Despite most civil cases settling, Kent has tried civil cases in many counties across eastern Washington and northern Idaho including Spokane, Whitman, Adams, Grant, Franklin, Benton, Yakima, and Kootenai.

Kent is respected in the legal community and has been requested to arbitrate multiple cases. He has been retained to argue cases on appeal to both the 9th Circuit of the United States Court of Appeals and Washington Appeals Court, Division 3. The Eastern District of Eastern Washington has also chosen Kent as a CJA (Criminal Justice Act) panel member where he is retained by the Court to represent individuals accused of a federal crime. Kent is a member of the Washington Trial Defense Lawyers and DRI, an international membership organization of lawyers involved in the defense of civil litigation.

When Kent is not busy in the court of law or meeting with clients, he relaxes in the company of his family by exploring the great Inland Northwest. Kent has a passion for the history of law, including photographing court houses around North Idaho and Washington State.  Other favorite past time include being a modern muscle car enthusiast and coffee connoisseur.